Is the southern coast of the Mediterranean Sea in Spain, a cozy resort located in the south of Spain in the province of Malaga. The total length of the beaches is about 300 kilometers. There are luxury hotels, cafes and restaurants, tourists are offered dozens of excursions love with Spain. The best places on the coast of Marbella considered, Passo Maritimo and Puerto Banus port. Russian name of this holiday region is "Beach sun". In the ranking of the best resorts in Spain, Costa del Sol occupy high positions and are considered the most prestigious and fashionable throughout the Spanish coast.

The swimming season on the Costa del Sol lasts much longer than in other resort areas of the country due to the mild and warm climate.

For many kilometers from the city of Malaga to Gibraltar extend picturesque and clean beaches, and across the region there is a unique flavor of the coast of Andalusia due to the continuing centuries of customs and traditions.

After visiting one of the resorts of the Costa del Sol, you can see the sights of Andalusia cities and rediscover Spain.

Malaga - a major port city with a charming historic center, the capital of the province and the spa town with excellent beaches, such as hotels and a vibrant nightlife. Here born artist Picasso and actor Banderas, hence the many museums, streets, restaurants and hotels after the first, second, as it is simply love. & Nbsp; Malaga attracts many tourists for its rich history, customs and traditions.

The main attraction of the park & ​​mdash; a rich and diverse flora and fauna. Here, on the territory of about 5000 hectares inhabited by 90 species of birds and over 50 species, grows up to 400 species of plants. In addition, the park Montes de Malaga is famous for the fact that here live chameleons that have already disappeared in most of Andalusia.

Marbella - the most luxurious and fashionable resort not only in Spain but also throughout Europe, which affects the views of the beauty of its gardens and parks, - the pearl of the Costa del Sol. All along the waterfront stretch of great beauty, sandy beaches, on the part of the city, they are surrounded by palm trees. The Royals, American Star TV screen, and even Arab sheikhs buy luxury villas here.

Marbella, like many resorts in Spain, combines the old and the modern city. Architecture Modern buildings harmoniously complements the ensemble of the old part of the city. 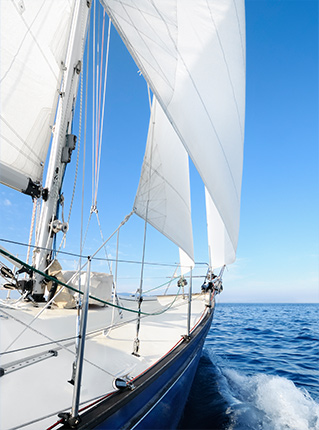 Puerto Banus - a city of luxury and wealth, gold purses and white yachts. The magnet for the rich and famous people of Europe. In this expensive resort Andalusia all hotels four-five star, entertainment complexes class of super-luxury and each villa has its own parking for several yachts.

The heart of the Costa del Sol - Torremolinos - the closest to the resort town of Malaga, located just 12 km away. Coast Torremolisa divided a small rock into two parts:. beach Carihuela and Bajondillo beach .
The abundance of hotels, cafes, bars and restaurants in this city, you can enjoy traditional Spanish cuisine, namely kitchen southern regions of Spain, which is rich in seafood dishes.

For lovers of nature in the city created an unusual botanical garden Museum — The Botanical Garden "Mill of Inca" (Jardin Botanico "Molino de Inca") . Old Mill (Molino de Inca), built in 1488, on the underground keys is currently the Museum of the History of the mill trade. Around the old mill is a large picturesque park, which gathered an impressive collection of plants. Also of great interest to tourists is a crocodile farm (Crocodile Park), whose walls crocodile lives Paco 4 meters long and weighing 600 kg — the biggest crocodile raised in captivity in Europe.

In summer, the bullring (Plaza de Toros Torremolinos) gather the best bullfighters in Spain. Aqualand water park daily attracts many tourists of all ages. Extreme slides and other water attractions cause delight even the most reserved people.

Benalmadena (Benalmadena) - another picturesque coastal town on the Costa del Sol, famous for its beautiful beaches of gray sand, which is much better and faster warming in the sun than limestone yellow sand and is perfect for warming up sand baths. Being close to Torremolinos, Benalmadena can be considered part of it, because of the existence of these cities the boundaries are almost erased.

Benalmadena Pueblo is a standard for these places Andalusian village. On the square in the village center is a fountain "A girl of Benalmadena", which is the symbol of the city.

It offers a magnificent view of the sea and the surrounding picturesque landscapes and historical monuments: Kolomares majestic castle and its surroundings. There is almost year-round sunny and warm, the air temperature is below 25 °.

Arroyo de la Miel is a residential area with shops, restaurants and other objects of the city infrastructure. Translated from the Spanish name of the area is "Honey Creek".

Buildings Area Arroyo de la Miel began between the fifteenth and eighteenth centuries. It is a residential area, not a beach-Hotel and here you can see the typical districts of the southern Spanish town, clean streets and a variety of local attractions.

Benalmadena Costa - the coastal part of the city, where there are numerous hotels, bars, restaurants and cafes. Luxury wide beaches extend along the coast almost 5 km, only occasionally crossing small rocks.

Benalmadena on the number of attractions is a small town, however, depending on a memorable vacation this city is one of the first places on the Costa del Sol.

Puerto Marina in Benalmadena — this is the most amazing port and residential complex in Europe.

The port has 110 berths for boats up to 6 meters in length and combines elements of Indian, Arabic and Andalusian architecture, has twice been recognized as the best port in the world.

The buildings of the residential complex, located on several artificial bulk islands also have a unique design.

This seaport in Benalmadena is considered one of the busiest and most visited places in the city.

Theme Park Selwo Marina in Benalmádena, dedicated to the wildlife of South America - is another unusual place that you should definitely visit. The park is divided into four zones. In the area of ​​Las Antillas - "Antilles" It is a huge glass dolphin, which contains tropical birds, reptiles, mammals, penguins and other animals. The Dolphinarium area are shows with sea lions and dolphins. And it & nbsp; live sea lions, which you can swim if you wish. In La Hondonada area you can see an amazing show of exotic birds, the habitat of which - the valley of the Amazon River. In the area of ​​"Amazonia" presented all sorts of fish and reptiles that inhabit the Amazon. And on the island of Isla de Hielo in conditions of artificially created cold penguins live.

Benalmádena Cableway (Telecabina (Teleferico) deliver tourists to the top of Monte Calamorro, with a magnificent view of the coast starting point of the cable car is located at the park Tivoli World amusement. Sitting in a comfortable cabin cable car, tourists in the beginning of the journey can enjoy panoramic views of Benalmádena areas like Arroyo de la Miel and Benalmádena Costa Going up & nbsp;. higher and higher, in front of them appear the outlines of the coast of Benalmádena, on the slopes of the surrounding mountains will begin to appear diverse vegetation. In fine clear day one can see the coast of Africa and the Strait Giblartar. 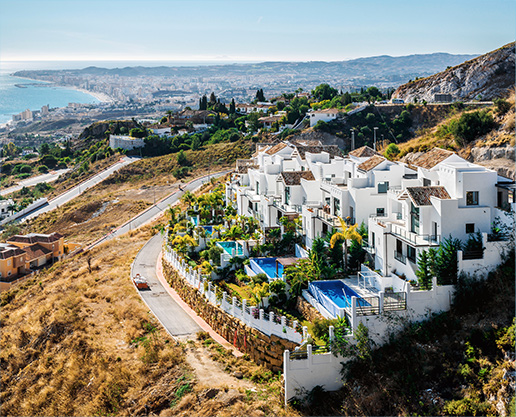 Fuengirola - at least well-known resort than Benalmadena or Torremollinos. Fuengirola coastline stretches for eight kilometers; beaches width - an average of 40 meters of the resort beaches are among the best in Spain. Since 2009, all seven golden sandy beaches of Fuengirola receive the prestigious award - the Blue Flag. Rent chairs and umbrellas available at all the beaches.

In Fuengirola has a sports port, where there are more than two hundred and anchorages. And also there is a well-known around the Coast Zoo (Zoo Fuengirola). It is a modern zoo, which was built in 2001. In it you can see the flora and fauna of the rainforest. It should be noted that this zoo is the only one of its kind in Europe. It consists of three zones: "Madagascar", "Sub-Saharan Africa" ​​and "Southeast Asia", each of which inexplicably transferred to the atmosphere of the places.

Hotel complexes in Fuengirola are located along the Mediterranean coast, mainly along the beach Santa Amalia. The resort is not five-star hotels; most of the hotels are 3 * or 4 *. On the territory of many hotels are casinos and slot machines.

Ronda - one of the most popular destinations among tourists vacationing on the Costa Sol delta.

The main attraction of Ronda and at the same time it is a symbol of the New Bridge (Puente Nuevo). The bridge was built in the 18th century, it reaches a height of almost 100 meters.

Among the other attractions of Ronda stands out: the main church of St. Mary, Arab baths, Muslim fortifications, the palace of Mondragon. In the vicinity of Ronda of interest archaeological monument Asinipo. These Roman ruins are 20 km from Ronda at an altitude of about 1000 meters above sea level. In addition, close to the town Zoo is "Snow Mountain" (Parque Natural Sierra de las Nieves), in whose territory is the third deepest in the world the gulf (gulf Gesm, 1100 meters deep).

Gibraltar, Nerja and Mijas & nbsp; - a small resort town on the Costa del Sol, on a tour of all of which will leave no more than one day. Each the city has a rich history and traditions, which are carefully preserved by the locals. Here you can see the following attractions: donkey taxis, the observation deck El Compass, Chapel in the rock, the Museum of Miniatures, Constitution Square, bullring, gardens with an observation deck.

The thrill of observing the graceful ocean inhabitants - dolphins and whales can be obtained by ordering a boat trip in the Atlantic Ocean Dolphin World (Giblartar).

Water Park Mijas Acuatic Park in Mijas can also give the sea of ​​delight and excitement of visiting the most modern water attractions and slides.

Costa del Sol - a truly unique resort, it has everything to learn the culture of the country and learn what it — Spain, with its beautiful beaches, rich flora and fauna, remarkable architecture and love for the national traditions.